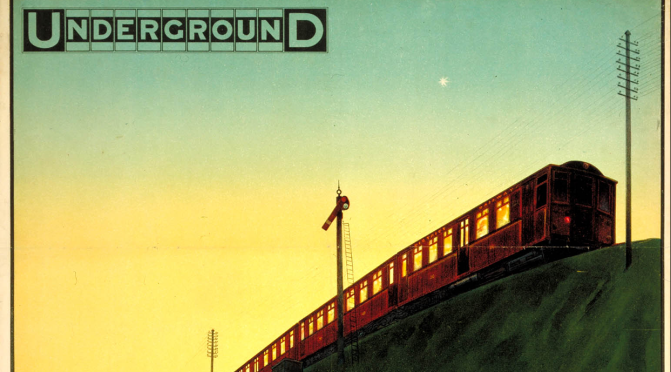 Throughout 2019, Transport for London and the London Transport Museum are celebrating the 150th anniversary of the District line. As part of the celebrations we are featuring twenty District line related posters from our outstanding poster collection in a new Poster Parade on display from 28 June to 19 September 2019. 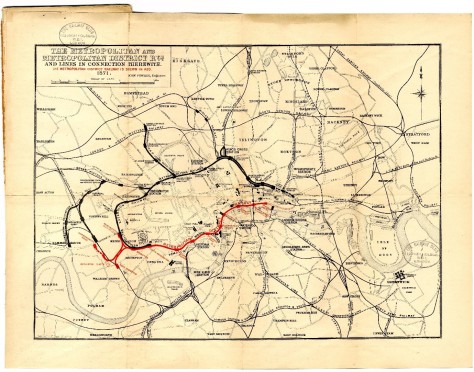 The District line opened in December 1868. Then known as the Metropolitan District Railway, it was the second underground passenger railway in the world after the Metropolitan line. Initially running only between Sloane Square and Westminster, seven more stations opened during the first year. The intention was to join up with the Metropolitan line at either end, forming an ‘Inner Circle’ linking all London’s mainline termini. However, rivalry between the two railways meant that the Circle wasn’t completed until 1884.

The District expanded its services to the western suburbs during the steam era to Hammersmith, Hounslow, Ealing and Wimbledon. But when the American financier Charles Tyson Yerkes first took an interest in the railway in 1899, it was in poor financial shape. Yerkes took over the District in 1901, and through his influence the Inner Circle and District were electrified.

The poster Light, power and speed by Charles Sharland features one of the new trains that were introduced during the electrification of the line. Electrification greatly improved conditions in the sections running underground, and the company promoted their new trains as offering comfortable, modern and technologically advanced travel. 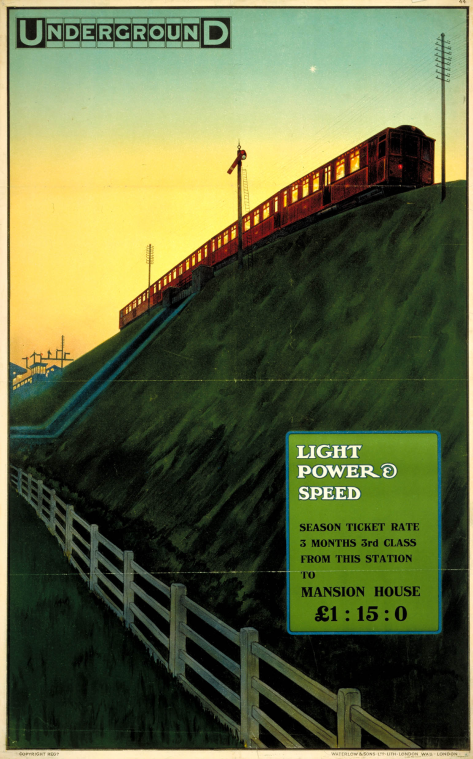 In addition to the District line, Yerkes’ Underground Electric Railways Company of London (UERL) owned many other underground railways, including the Bakerloo, Piccadilly, Hampstead (now part of the Northern line) and Central lines. To encourage off-peak travel the UERL used posters to promote destinations which could be reached by their expanding network. For the western section of the District line this meant attractions which are still popular today, such as Richmond and Kew Gardens. At the time Sudbury Town and South Harrow were promoted as rural destinations, easily reached in time to see a gorgeous sunset. Though originally served by the District line, these stations were transferred to the Piccadilly line in 1932. At the eastern end of the District line, services from Whitechapel to Upminster opened in June 1902. The District Railway also ran through trains to the popular seaside resort of Southend. The Upminster Windmill and the Canvey Lady in Southend were both familiar local landmarks at the time, and whilst the Canvey Lady was pulled down after the Second World War, the windmill survives and is now a listed building. The process of electrification was slower at this end with Upminster served by steam until 1932, and Southend until after the Second World War. 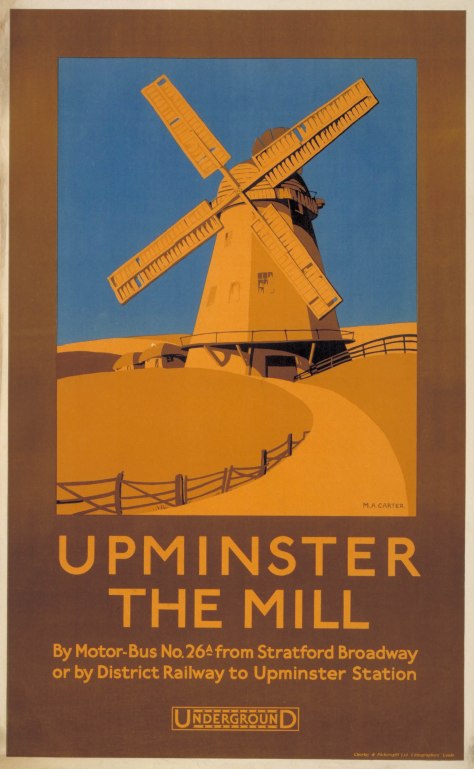 Today the District line is being transformed once again, with air-conditioned, walk-through trains introduced on the line in 2014, and the Four Lines Modernisation programme due to deliver a new signalling system by 2023.

Check out our online exhibit on Google Arts & Culture to learn more about the history of the District line, and visit the Poster Parade (28 June – 19 September 2019) at the Museum to see our stunning posters up close.

Today's #MuseumAlphabet is E for Engine. This one is a Gardner diesel 6LXB engine used on DMS-type buses. The DMS-type, introduced in the early 1970s, was the first mass produced double decker bus designed for one-person operation. #LTMCollections #engine #doubledeckerbus #londonbus #museumcollection
Our Customer Service team are always at hand to share their knowledge of the collection with our visitors. While The Museum is closed, we'll be sharing some of their favourite objects online. First up, Gillian Lewis who chose this photograph of women working on the chassis and engine of an early B-type bus during the First World War. #ltmcollections #ltmlove #museumobjects #frontofhouse #museumfromhome #museumcollection #stillseeingthings
Billy Brown of London Town is a cartoon character created by David Langdon. Public information posters featuring Billy Brown were used by London Transport in the 1940s. Very few posters of Billy had much colour in them. Can you fill this drawing up with lots of colour and draw in the background? Download your colour in sheet from our website (link in bio). #thingstodoathomewithkids #ltmcollections #stayathome #stayhome #thingstodoathome #easterholidays #familyfun
We love this beautiful Kew Gardens poster from 1915 by Maxwell Ashby Armfield - ideal to bring a bit of spring into your living room. Available in our shop online. All purchases support London Transport Museum's charitable work. #ltmuseumshop #posters #postercollection #ltmcollections #shoponline
While our doors are shut, we don't want you to miss out on #Easter family fun, so we're bringing the activities to you! Head over to our website for crafts, quizzes and games to do while you #StayHome and find out all about Billy Brown of London Town. ltmuseum.co.uk/learning/activities #familyfun #stayathome #museumfromhome #ltmcollections #easterholiday #billybrown #thingstodo #stayathomechallenge
This train describer sign was used on platforms in the early 1900s. The box was illuminated internally to light up arrows indicating the different destinations. It worked in conjunction with an encoder, drum receiver and combinator. #SundaySigns #ltmcollections #traindescriber #platformsign #londonunderground #signs