As recently restored 353 had not previously run in its current form (using a modified PMV underframe), it was necessary to bed in the suspension and brakes; and to build confidence in the performance and dynamic behaviour of the vehicle. The tests were undertaken on the Great Central Railway over a three day period, with mileage accumulation carried out on day 1 (Monday 19th November). For the initial test runs the carriage was sandwiched between two locomotives (Cl45 D123 and Cl20 D8098 ) to enable rapid reversals at the possession limits and build up mileage as quickly as possible.

Once safe operation at 25 mph had been demonstrated on the first day, the carriage was tested to 40 mph, then to a maximum higher speed of 50mph on day 2 (Tuesday 20th November). The Class 20 locomotive provided the motive power for the high speed test, and with the light load of the carriage was very quick in reaching the desired speed. Day 3 (Wednesday 21st November) was booked as spare in case there were any issues earlier in the week. In the event this was used for additional mileage accumulation.

The following amateur footage shows the test train leaving the outskirts of Loughborough during one of the high speed runs.

The GCR was chosen as it has relatively straight and even track; ideal conditions for undertaking brake calculations and measuring vertical and lateral accelerations. The railway had been granted a derogation from the Office of Rail Regulation  for undertaking the high speed test. The Institute of Railway Research carried out the safety assurance work for the carriage and conducted the instrumentation and testing of the vehicle with support from London Underground and Festiniog Railway representatives. 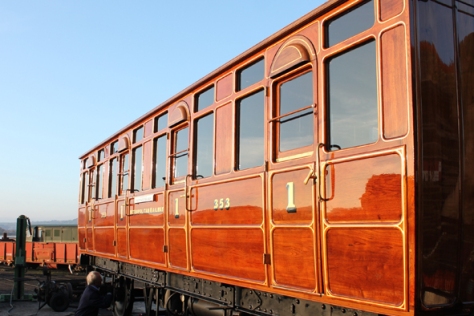 The gleaming carriage, finished with gold leaf and carrying no fewer than ten coats of varnish, bears little resemblance to the sorry-looking hulk which arrived at Porthmadog, North Wales in August 2011 after being used as a garden shed.

Craftsmen at the Ffestiniog and Welsh Highland Railway this week completed to schedule the 15-month, £200,000 restoration. The carriage travelled from Boston Lodge Works and over Britannia Bridge in Porthmadog before being loaded onto a waiting lorry for transport to the Great Central Railway in Loughborough. Next week the carriage will undergo dynamic testing on the GCR as it is too large to be tested on the narrow gauge F&WHR.

Today's #MuseumAlphabet is D for District Line. Of all the Tube lines, the District - which had its 150th anniversary last year - serves the most stations. But do you know how many exactly? Find out in our Google Arts & Culture story (link in stories) #district150 #districtline #ltmcollections #googleartsandculture
Guess the #tubesong 🚇👩‍🎤 🎼This girl is a lonely girl, takes the train from Paddington to Oxford Circus... This girl is maid of **** ****** 🎼 What's the title of this David Bowie song mentioning a Tube station in central London? #MuseumGames #davidbowie #ltmcollections
In our #MuseumAlphabet C is for Conductorettes as female bus conductors were called during the First World War, when they were recruited by the LGOC to replace the men fighting in the war. This poster is part of a set of lithographs by Archibald Standish Hartrick published in 1918 to celebrate the contribution of transport workers to the war effort on the Home Front. (Link in story for more info) #ltmcollections #busconductors #ww1 #firstworldwar #transporthistory
This placard was carried by @transportforlondon staff during Trans Pride in Brighton in 2018. It is now part of our collection. OUTbound - TfL's LGBT+ staff network - installed trans pride roundels across the network for the first time in 2018 to address trans inclusion more fully and show their support to the trans community. #TransDayofVisibility #transpride #lgbtq🌈 #outbound #tfl #ltmcollections #placard
Calling all competitive households, here's something to pass the time and ease some of the tension 😉 Comment below and tag the sorest loser you know for a chance to win one of our new Tube line-themed Topple Towers! #museumgames #giveaway #ltmuseumshop #toppletower #tubelines
This week's #SundaySigns is a very special one for us! To continue the celebration of the Museum's 40th birthday, here's the bronze placque once displayed in Covent Garden to commemorate the Royal Opening by Princess Anne. The placque is now part of our permanent collection. #ltmcollection #ltmlove #princessanne #40thanniversary